The Board of Commissioners have placed high value on transparency and civic engagement. It is important that the residents of Upper Gwynedd Township are receiving complete and accurate information about various Township issues, news, and events. This section of the website has been dedicated to dispel rumors by addressing incorrect information posted on social media and other non-Township affiliated websites.

We have been receiving questions about a few important topics and wanted to answer them in case you are wondering about them:

This plan is taken directly from our newly approved 2040 Comprehensive Plan which reviews the Martin Tract as a property that would be well suited for use as a recreation area.  At a recent Board of Commissioners meeting residents from the home on the property expressed concern about being evicted from their home.  While it is contemplated in the Comprehensive Plan that the home could be repurposed, the Board currently has no plans to condemn the property, it is not on our agendas to do so.  As that is the case, the Board could not be planning to evict any residents from their private residence, nor did they ever have any plans to evict any residents from that house. The comprehensive plan outlines a vision for the property and if the Board was to acquire the property, further planning would occur before any action was taken. The Board of Commissioners is still working to set up a meeting with the Martin Family to hear their plans on developing the property.  The Martins cancelled the previously scheduled meeting in early November.  We hope to continue negotiations towards a resolution for this property. Upper Gwynedd Township Board of Commissioners have no plans to cost Township taxpayers millions of dollars to condemn property for Recreational Space.   The Commissioners are actively trying to work and negotiate with the Martin Family for a reasonable use of the property that will create a compromise that would achieve the Commissioners goals of preserving and creating passive recreational space for all to enjoy.

The Upper Gwynedd Township staff and elected officials receive a lot of questions about the corners of Sumneytown Pike and West Point Pike/Church Road.  The main question we get is why these two corners remain vacant and undeveloped. We have created this summary to help residents and visitors understand what is happening in each area.

The Township has been involved in several pieces of litigation regarding this property, stemming from the property owner’s (Provco’s) land development requests to build a Wawa gas station with 16 fueling locations on that corner. When reviewing land development requests, the Township must first and foremost consider that it is our priority to protect the health, safety and public welfare of the community.

Generally, if an applicant’s project is not permitted by a “By-Right Plan” that completely complies with our Zoning Regulations, most applicants start their development process by submitting an application to the Zoning Hearing Board requesting the zoning relief necessary to proceed with their project. Some uses have been determined (by our Zoning Ordinance) to always need a specific approval from the Zoning Hearing Board because of their substantial impact on the community, such as gasoline service stations or new or used car sales.

In 2016, Provco requested relief from the Zoning Hearing Board (ZHB) to allow its proposed convenience store and gas station. The Township believed that the gas station use was one of the types of uses in the Township that requires specific ZHB approval (as discussed above), including a demonstration by Provco that it could meet certain traffic and safety conditions; none of which Provco met.  These conditions are sometimes called “special exception standards”.  Somewhat surprisingly, the ZHB issued a decision in 2016, allowing the applicant to sell gasoline as an “accessory use”, but without making Provco demonstrate compliance with the special exception standards established by the Township Zoning Ordinance (the “2016 ZHB Decision”). The special exception standards were very important in this particular case because they required Provco to demonstrate the safety and traffic impacts of the proposed Wawa in Sumney Corner location.  The Township Board of Commissioners disagreed with the 2016 ZHB Decision and appealed it. The Court of Common Pleas (in Norristown) and the Commonwealth Court (in Philadelphia) agreed with the Board of Commissioners. On June 7, 2021, the Pennsylvania Supreme Court refused to hear any further arguments from Provco, and the previous decisions in favor of the Township were sustained.

While the ZHB appeal was ongoing, Provco also filed two land development applications on this property (at their own risk of because of the pending appeals of the 2016 ZHB Decision). Both land development applications were denied by the Board of Commissioners due to serious concerns about the safety of cars exiting the site onto Sumneytown Pike and West Point Pike. Provco’s proposed development failed to comply with the Townships Ordinances, including, but not limited to, its traffic requirements.  The large SEPTA bridge (and especially the headwalls of that bridge on either side of Sumneytown Pike) obscures visibility for turns both into and out of the site, and these traffic movements are extremely hazardous due to the lack of visibility up Sumneytown Pike caused by the bridge.  Vehicles trying to make either turn would not have a clear sight-line to eastbound Sumneytown Pike traffic.  Provco filed an appeal of both those decisions made by the Board of Commissioners, forcing the Township into additional legal disputes.  Ultimately, the Commonwealth Court agreed with the Township, and upheld both of the Board of Commissioner’s land development denials in September of 2019.

In 2019, Provco filed still another legal challenge in an effort to have its Wawa development approved.  This suit, called a “Substantive Validity Challenge”, alleged that a convenience store also selling gasoline is a recognized, permitted, single use in Pennsylvania, and therefore the Upper Gwynedd Township Zoning Ordinance (and virtually every zoning ordinance in the Commonwealth) was allegedly unconstitutional because the Zoning Ordinance permits this use as two separate uses or as a combination of two uses, but not as a single use.  The Commissioners disagreed with Provco’s position and defended the Township’s Ordinances during several hearings on the allegation.  On February 29, 2020, the Township Zoning Hearing Board rendered an oral decision on the Validity Challenge denying the challenge. That decision was not appealed and is therefore a final decision.

The Township has spent hundreds of thousands of dollars on legal bills due to these numerous cases and applications initiated by Provco. As stated above, it is the foremost duty of the Township to protect the health, safety and public welfare of the community. The Township refuses to be pushed around by developers or large companies who apparently believe that the rules do not apply to them, and who appear to have little regard for the safety of Township residents.  The Township would obviously prefer to spend this money for parks and other projects, but development threats that endanger the lives of our residents have to be our highest priority.  Of the four (4) different matters for which the Township requires legal services related to this development (Zoning Hearing Board, Land Development one, Land Development two, and the recent substantive validity challenge), all have been initiated by Provco and none of them have been initiated by the Township.  The Township simply defended against Provco’s continued assault of the Township’s regulations, which were designed to ensure the health and safety of the Township residents. To date, all of the substantive decisions made by the Courts have supported the Township, proving that the Township’s concerns are reasonable, legitimate, and well-founded. With the recent Supreme Court decision refusing to hear any further arguments from Provco, the Township is hopeful that these matters are concluded.

Around the same time that Provco proposed a Wawa on the Sumney Corner, another applicant (Hartford Properties also known as Upper Gwynedd Equities) proposed a Royal Farms gas station and convenience store on the opposite corner, which most people call the “Genuardi’s” Corner.  The Hartford proposal also required zoning relief and applied to our ZHB to operate, including a request for a special exception to permit the sale of gasoline.  As a result, unlike Provco, Hartford presented evidence to the ZHB regarding the health, safety and public welfare impacts of the proposed Royal Farms and the traffic associated with it.  On June 28, 2016, the ZHB issued a decision (the “ZHB Hartford Decision”) granting the zoning relief requested by Hartford, subject to certain conditions.   Hartford appealed some of the conditions in the ZHB Hartford Decision to the Court of Common Pleas, but eventually withdrew this appeal.

In 2019, Hartford, now known as Upper Gwynedd Equities, filed a land development application for the Shoppes at Upper Gwynedd (on the Genuardi’s Corner), which included the Royal Farms, that was granted by the Commissioners after Hartford demonstrated that its plans substantially complied with the Township Ordinances.  Again, Provco appealed the Commissioners’ decision, but that appeal appeared to have been filed beyond the permitted deadline.  Provco has since withdrawn their appeal and that matter is therefore concluded.

After the denial of Provco’s appeals of the Township decisions related to the Hartford project, Hartford moved forward with demolishing the existing structures on the Genuardi’s Corner and the construction of the Royal Farms. With the Genaurdi’s Corner being so large, Hartford also plans on building two (2) commercial buildings on the site.

In February of 2021, Hartford applied for conditional use approval to operate a day care in one of the commercial buildings to be built on the Genaurdi’s Corner. After two hearings before the Board of Commissioners which involved an in-depth review of the specifics of the proposed day care and the traffic mitigation and safety features provided therefor, on July 20, 2021, the Commissioners approved the conditional use for the day care subject to a variety of conditions designed to ensure the safety of the community.

It is important to note that the Hartford/Royal Farms Application was handled with the identical scrutiny as the Provco/Wawa Application by the Board of Commissioners, which will always endeavor to ensure the health, safety and public welfare of our constituents. Upon the examination of the evidence presented to the Commissioners, the Hartford site (Genuardi’s Corner) does not have the same serious health, safety and welfare conditions that exist on the Provco site (the Sumney Corner) because the Genuardi’s Corner is much larger, is located across Sumneytown Pike and has much better visibility under the railroad bridge.

We hope this summary helps to explain the complex legal and safety issues on these two corners.  If not, please feel free to call the Township Manager, Sandra Zadell, anytime to meet and discuss this issue at 215-699-7777. 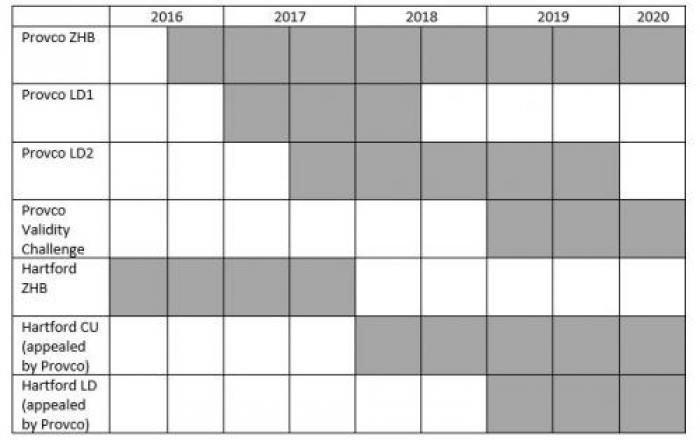 If you wish to learn more about wildlife or nuisance wildlife, you can visit the PA Game Commission's website at https://www.pgc.pa.gov/Pages/default.aspx# 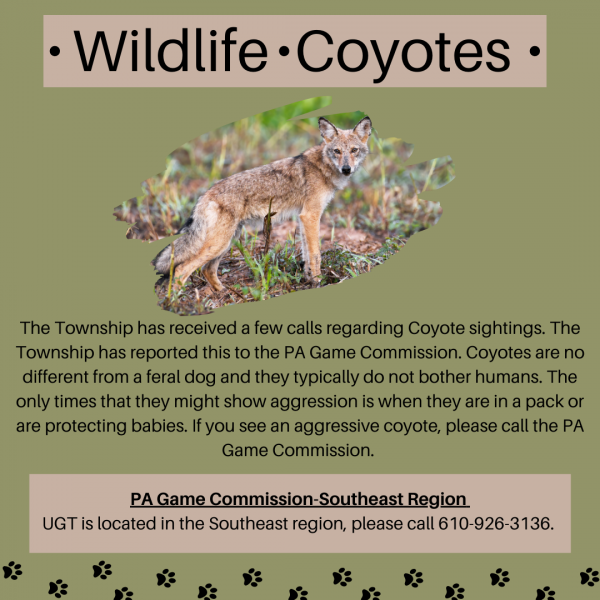